Asterion I : Prosthesis for an Urban Rainforest

Asterion I is a project that starts from the position that urban space is not an undifferentiated human space, from which individual animal species may be parcelled out some small amount. Instead, we must understand urban space as the site of complex environmental and spatial conditions that are the result of overlapping metabolic systems systems involving the exchange of energy and matter; urban systems of goods, transport and waste exchange compete with other systems, such as the conversion of sun energy with photosynthesis, the decay of organic matter, et cetera. This urban space is the site of any number of potentialities. What this project illustrates is a spatial and environmental organization whereby several species are accommodated, that is, several of these potentialities are layered together, the urban transportation and infrastructure grid, together with a ‘shadow ecosystem,’ laying in wait.

From the abstract terms ‘animal’ and ‘ecosystem,’ we select a few species that serve as keystone species for the temperate rainforest ecosystem of British Columbia’s coast: Salmon, Black Bear, Bald Eagle, and Douglas Fir. These species are inserted into one of North America’s most densely populated areas, Vancouver’s downtown peninsula.

With this manoeuvre, we do not treat the project in a tabula rasa condition, as there is already a complex spatial network at play, though much of it is underutilized. We leave the buildings in the city as they are, and move the existing transportation and utility infrastructure vertically. In its place, we ‘seed’ the ground with the appropriate environmental cues to reintegrate the species diversity of the area. These moves include allowing water runoff in streams, and ensuring sufficient sky cover for the appropriate tree species to grow. This ‘seeding’ is a retroactive manoeuvre, replicating the environmental conditions of these species in their ‘already existing’ in order to encourage their ‘becoming.’

By establishing the spatial and environmental conditions for this subset of the temperate rainforest’s ecosystem, we encourage the proliferation of other species, from the microorganisms that break down this new organic matter, to the flora that will feed on this matter, all the way through to the other predators at the top of this food chain. 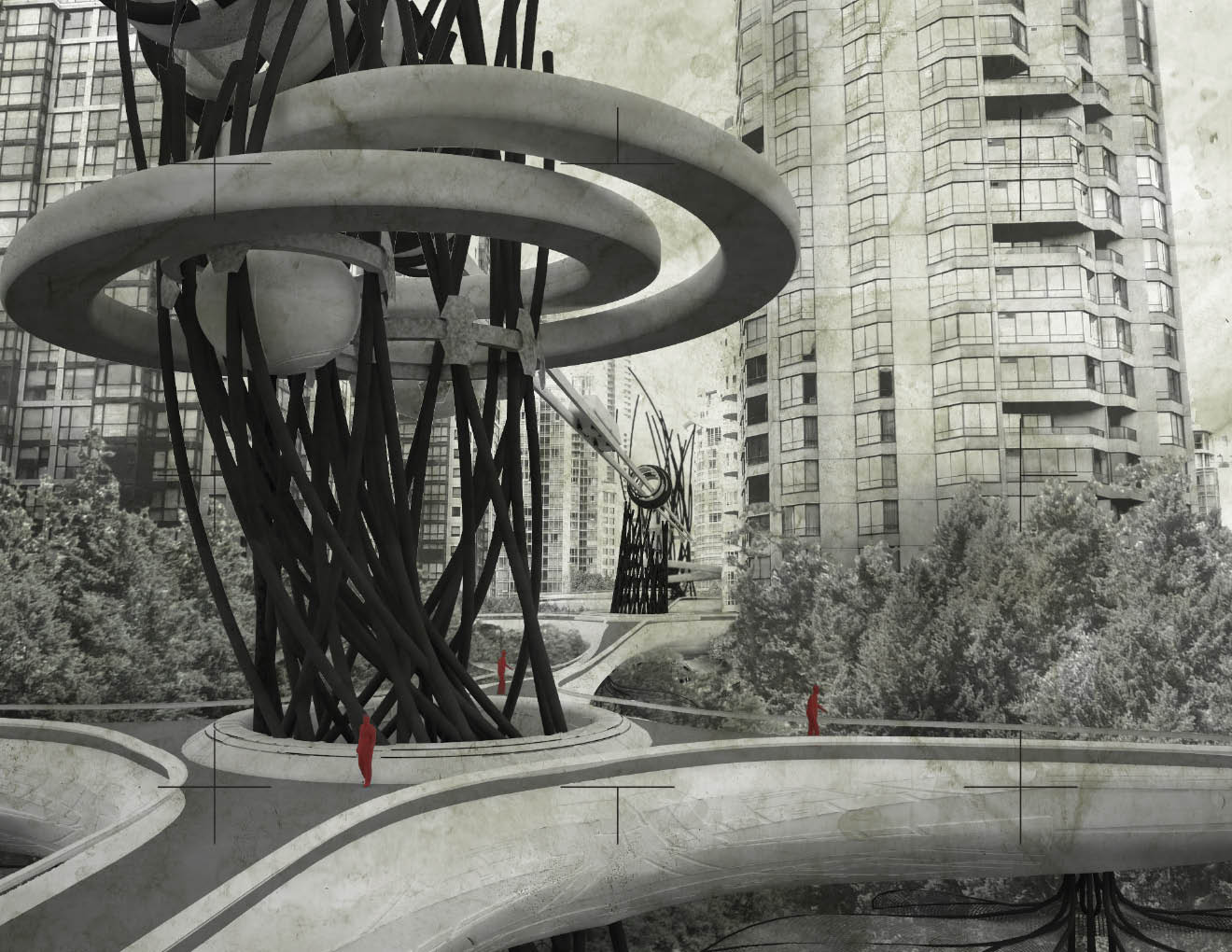 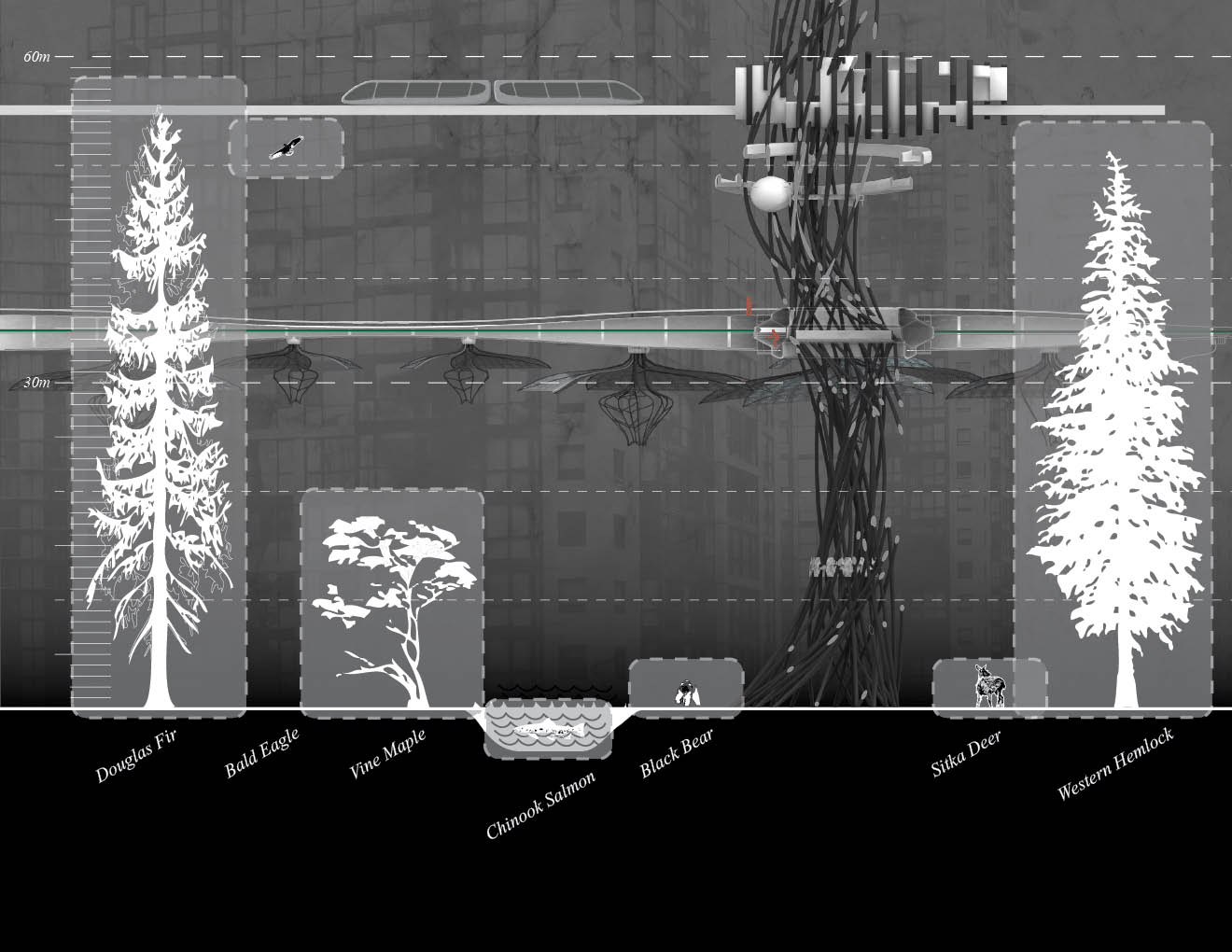 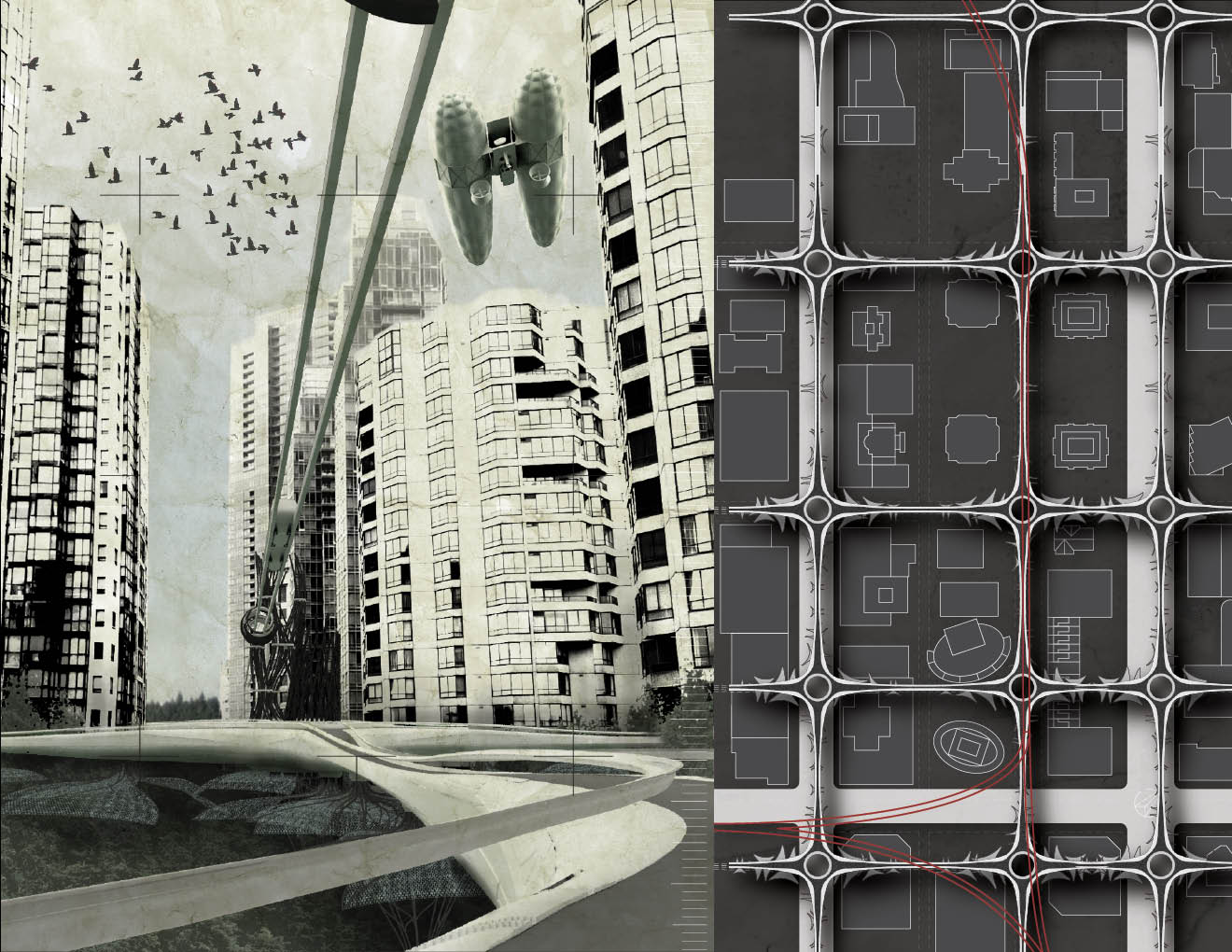 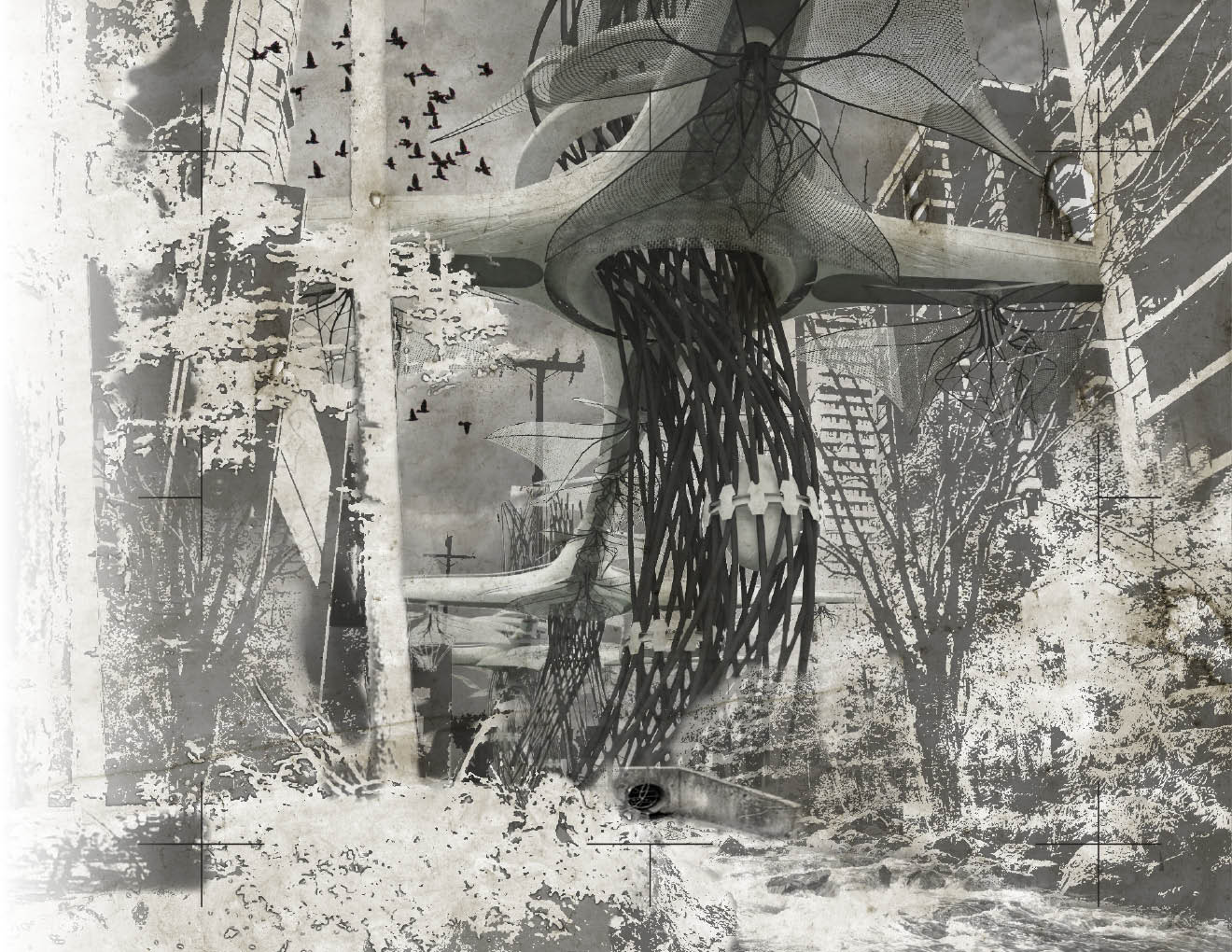 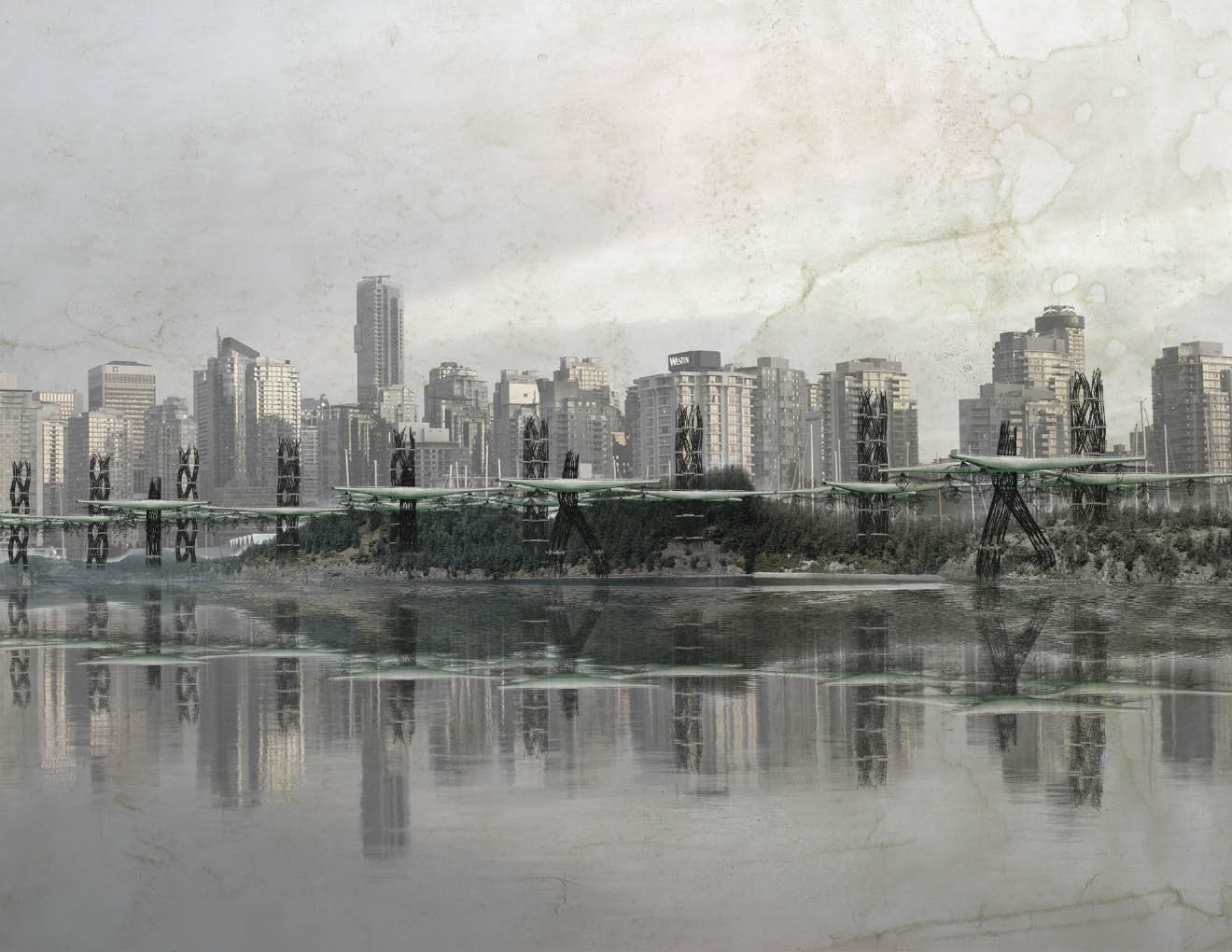